The heart has a natural pacemaker that regulates the pace or rate of the heart. It sits in the upper portion of the right atrium (RA) and is a collection of specializes electrical cells known as the SINUS or SINO-ATRIAL (SA) node.

Like the spark-plug of an automobile it generates a number of "sparks" per minute. Each "spark" travels across a specialized electrical pathway and stimulates the muscle wall of the four chambers of the heart to contract (and thus empty) in a certain sequence or pattern. The upper chambers or atria are first stimulated. This is followed by a slight delay to allow the two atria (atria is plural for atrium and pronounced ay-tree-ya) to empty. Finally, the two ventricles are electrically stimulated.

In an automobile, the number of sparks per minute generated by a spark plug is increased when you press the gas pedal or accelerator. This revs up the motor. In case of the heart, adrenaline acts as a gas pedal and causes the sinus node to increase the number of sparks per minute, which in turn increases the heart rate. The release of adrenaline is controlled by the nervous system. The heart normally beats at around 72 times per minute and the sinus node speeds up during exertion, emotional stress, fever, etc., or whenever our body needs an extra boost of blood supply. In contrast, it and slows down during rest or under the influence of certain medications. Well trained athletes also tend to have a slower heart beat. 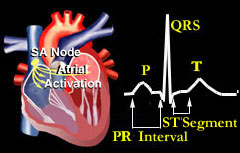 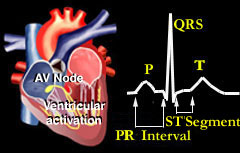 The electrical impulse then moves to an area known as the AV (atrio-ventricular) node. This node sits just above the ventricles. Here, the electrical impulse is held up for a brief period. This delay allows the right and left atrium to continue emptying it's blood contents into the two ventricles. This delay is recorded as a "PR interval." The AV node thus acts as a "relay station" delaying stimulation of the ventricles long enough to allow the two atria to finish emptying.

Following the delay, the electrical impulse travels through both ventricles (via special electrical pathways known as the right and left bundle branches). The electrically stimulated ventricles contract and blood is pumped into the pulmonary artery and aorta. This electrical activity is recorded from the surface of the body as a "QRS complex". The ventricles then recover from this electrical stimulation and generates an "ST segment" and T wave on the EKG.

In summary, the heart constantly generates a sequence of electrical activity with every single heart beat. This can be recorded on paper or displayed on a monitor by attaching special electrodes to a machine that can amplify and record an EKG or ECG (electrocardiogram). The animation (above) shows the sequence of electrical activity throughout the heart. Note how the chambers of the heart contract when they are electrically stimulated. This in turn makes the heart valves open and shut.

Click on the NEXT button below to move to the EKG section . .