What is Coronary Angioplasty?
How is Angioplasty or PTCA performed?
How long does it take?
How safe is it?
Show me the results of an angioplasty procedure

The heart is supplied by three major coronary arteries and their branches (as described in the cardiac cath section). Atherosclerosis produces discrete (confined) or scattered areas of blockage within a coronary artery. When the blockages are large enough, they reduce blood supply to heart muscle and produce angina. The tests used to make the diagnosis of coronary artery disease and its medical treatment have been discussed elsewhere. Some patients with coronary artery disease may require surgery. Many patients with serious disease or those who fail on medical therapy are treated with a "needle hole" or "percutaneous" (through the skin) procedure that is performed in the cardiac cath laboratory. Angioplasty is one of these procedures. It was introduced to the world by Dr. Andreas Gruentzig in the mid to late 1970's and is widely used today.

What is PTCA or Angioplasty?

Angioplasty is a technique used to dilate an area of arterial blockage with the help of a catheter that has an small (usually only (2-4 mm in diamter and around 20 mm long) inflatable small sausage-shaped balloon at its tip, as shown below:


Since the catheter is introduced into the the channel of the artery through the skin of the groin or the wrist (Percutaneous = through the skin and transluminal = in the channel or lumen of a blood vessel). treatment of coronary arteries with use of this technique is called PTCA, Percutaneous Transluminal Coronary Angioplasty or balloon angioplaty.

Angioplasty physically opens the channel of diseased arterial segments (see below), relieves the recurrence of chest pain, increases the quality of life and reduces other complications of the disease. Since it is performed through a little needle hole in the groin (or sometimes the arm) it is much less invasive than surgery and can be repeated more often should the patient develop disease in the same, or another, artery in the future.

How is PTCA performed?
Prior to performing PTCA, the location and type of blockage plus the shape and size the coronary arteries have to be defined. This helps the cardiologist decide whether it is appropriate to proceed with angioplasty or to consider other treatment options such as stenting, atherectomy, medications or surgery. Cardiac catheterization (cath) is a specialized study of the heart during which a catheter or thin hollow flexible tube is inserted into the artery of the groin or arm. Under x-ray visualization, the tip of the catheter is guided to the heart. Pressures are measured and an x-ray angiogram (angio) or movie of the heart and blood vessels is obtained while an iodine- containing colorless "dye" or contrast material is injected into the artery through a catheter. The iodinated solution blocks the passage of x-rays and causes the coronary arteries to be visualized in the angios. In other words, coronary arteries are not ordinarily visible on x-ray film. However, they can be made temporarily seem by filling them with a contrast solution that blocks x-ray.

As discussed in the cardiac cath section, a sheath is introduced in the groin (or occasionally in the arm). Through this sheath, a long, flexible, soft plastic tube or guiding catheter is advanced and the tip positioned into the opening or mouth of the coronary artery. In the picture below, the catheter tip is positioned in the mouth of the left main coronary artery.
The tube measures 2 to 3 mm in diameter. The tip of the catheter is directed or controlled when the cardiologist gently advances and rotates the end of the catheter that sits outside the patient. 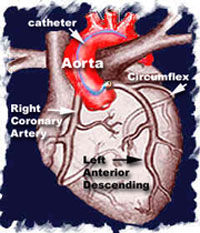 Once the catheter tip is seated within the opening of the coronary artery, x-ray movie pictures are recorded during the injection of contrast material or "dye."

After evaluating the x-ray movie pictures, the cardiologist estimates the size of the coronary artery and selects the type of balloon catheter and wire that will be used during the case. Heparin (a "blood thinner" or medicine used to prevent the formation of clots) is given.
The guide wire which is an extremely thin wire with a flexible tip is inserted into through the catheter and into the coronary artery. The tip of the wire is then guided across the blockage and advanced beyond it (see animation, top-right). The cardiologist controls the movement and direction of the guide wire by gently manipulating the end that sits outside the patient. This wire now serves as a "guide" or rail over which the balloon catheter can be delivered. The tip of the balloon catheter is then passed over the guide wire and positioned across the lesion or blockage.

A deflated sausage-shaped balloon is located on the tip of the catheter shaft. It is inflated by connecting it to a special handheld syringe pump. A mixture of saline and contrast material is used to inflate the balloon. The contrast material helps to visualize the balloon when it is inflated. The balloon catheter also has metallic markers (either at the center or on either side of the balloon). This helps the cardiologist know the location of the otherwise "invisible" balloon.

Inflation is initially carried out at a pressure of 1 to 2 times that of the atmosphere and then sequential and gradually increased to 8 - 12 and sometimes as high as 20 atmospheres, depending upon the type of balloon that is used. The handheld inflation syringe has markers that are used to determine the pressure. The balloon is kept inflated for 1/2 to 2 minutes and then deflated until the next inflation is used. Intermittent inflation allows blood flow through the artery during the time that the balloon is deflated. A nitroglycerin solution may be injected to prevent spasm of the artery.

As the balloon is inflated, it compresses the atheroma and plaque that make up the coronary blockage. The process is similar to sticking a clump of a spongy plastic "dough" to the inside wall of a plastic tube (with the help of a super-type glue) to create a blockage that restricts the flow of water. The "dough" is then compressed with a balloon tipped catheter. During each inflation, the "dough" is compressed or "squashed" even more. This is continued until the opening of the tube at that level of the blockage becomes closer to the tube not covered with "dough." Unfortunately, the obstruction material of atherosclerosis is composed of soft fatty atheroma, firm plaque and a medium consistency mixture of the two. These material resist expansion by a balloon in different ways. Soft material is compressed easily while firm matter compresses to a lesser degree and may demonstrate cracks following expansion by a balloon. That is why the opening created by a balloon is not always round and smooth.

It is important to remember that the balloon of angioplasty catheters is not made of rubber used in toy balloons. Special material is employed so that the catheter balloon inflates to a predictable size at a given pressure. For example, a particular brand of balloon will open up to a 2 mm diameter with 8 atmospheres of pressure and 2 1/4 mm at 16 atmospheres.

The picture on the left shows the rounded unobstructed channel of a normal coronary artery (cross-sectional view). The middle picture shows that the channel (through which blood flows) is significantly reduced by a blockage. The diagram on the right shows an increased opening after the blockage was dilated or opened up with balloon angioplasty.

The patient remains awake throughout the procedure and mild sedation is used to ensure relaxation and comfort. The deflated balloon and wire are withdrawn when the cardiologist is satisfied with the results. If the result is unsatisfactory, a second balloon or even a stent may be considered. Final angiograms or movie x-ray pictures are taken upon completion of the case. The guiding catheter is then withdrawn.

The sheath is secured to the groin with a suture and the patient is sent to his or her room. The sheath is removed when the effect of Heparin wears off. This is determined by obtaining blood tests at specified intervals. Other medications that prevent blood-clots may be used in some cases. Pressure is applied to the groin with a clamp. Once it is confirmed that there is no bleeding, a sandbag or ice bag is placed over the groin.

After approximately 6 hours, the patient is ambulated or allowed to walk with assistance and is usually discharged the following morning. A Band-Aid or small dressing is applied over the tiny needle hole. Slight bruising around the site is not uncommon.

In some labs, a sealant device is applied in the cath lab after removal of the sheath.

For a description of the equipment, preparation and experiences during the procedure, please review the cardiac cath section. It is not uncommon for patients to experience chest discomfort while the balloon is inflated. This usually resolves when the balloon is deflated. Patients who are uncomfortable can be given intravenous medication to alleviate this problem.

How long does the procedure take?
It can take anywhere from 30 minutes to a three hours to perform the entire case. The duration is dependent upon the technical difficulty of the case and the number of balloon catheters that have to be employed.


How safe is the procedure?
In the hands of experienced cardiologists, and with availability of modern day technology, it is estimated that the risk of death is during an angioplasty procedure is usually less than 1%, while the chance of requiring emergency bypass surgery is around 2% or less. It is a relatively safe procedure and is carried out all over the world. An "out patient" or an inpatient uncomplicated angioplasty usually require 23 hours or less of hospitalization after the procedure.

The risk of a other serious complication is estimated to be less than 4 and probably around 1 to 2 per thousand, and similar to that described for cardiac cath. The risk of a heart attack and bleeding that requires a blood transfusion is increased when compared to cardiac cath. However, the risks are relatively low and acceptable in most cases when one balances the potential benefit against the expected risk (risk-benefit ratio).

The aggravation of kidney function (particularly in diabetics and those with prior kidney disease) is higher than that expected with cardiac cath because of the larger amount of contrast material that is usually required. In such cases, the cardiologist takes extra precautions to prevent this possible complication.