The heart is the pump station that  is responsible for circulating blood throughout the body. It is about the size of your clenched fist and sits in the chest cavity between two lungs. Its walls are made up of muscle that can squeeze or pump blood out every time that the organ "beats" or contracts.
Fresh, oxygen-rich air is brought to the lungs through the trachea (pronounced tray-kee-ya) or windpipe every time that you take a breath. The lungs are responsible for delivering oxygen to the blood, and the heart circulates the blood to the lungs and different parts of the body.

The heart is divided into FOUR chambers or "rooms". You can compare it to a Duplex apartment that is made up of a right and a left unit, separated from each other by a partition wall known as a SEPTUM (pronounced sep-tum).

Each side of the "duplex" is subdivided into an upper and a lower chamber. The upper chamber is known as an ATRIUM (pronounced ay-tree-yum) while the lower chamber is referred to as a VENTRICLE (pronounced ven-trickle).
The right atrium (RA) sits on top of the right ventricle (RV) on the right side of the heart while the left atrium (LA) sits atop the left ventricle (LV) on the left.

The right side of the heart is responsible for sending blood to the lungs, where the red blood cells pick up fresh oxygen. This OXYGENATED blood is then returned to the left side of the heart. From here the oxygenated blood is transported to the whole body supplying the fuel that the body cells need to function. The blood cells of the body extract or removes oxygen from the blood. The oxygen-poor blood is returned to the right atrium, where the journey began. This round trip is known as the CIRCULATION of blood. 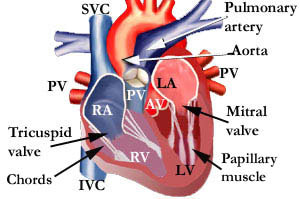 The figure shown above is a section of the heart, as viewed from the front. It demonstrates the four chambers. You will also notice that there is an opening between the right atrium (RA) and the right ventricle (RV). This is actually a valve known as the TRICUSPID (pronounced try-cus-pid) valve. It has three flexible thin parts, known as leaflets, that open and shut. The figure below shows the mitral and tricuspid valves, as seen from above, in the open and shut position.

When shut, the edge of the three leaflets touch each other to close the opening and prevent blood from leaving the RV and going back into the RA. Thus, the tricuspid valve serves as a trapdoor valve that allows blood to move only in one direction - from RA to RV. Similarly, the MITRAL valve (pronounced my-trull) allows blood to flow only from the left atrium to the left ventricle. Unlike the tricuspid valve, the mitral valve has only two leaflets.

In the top diagram, you will also notice thin thread like structures attached to the edges of the mitral and tricuspid valves. These chords or strings are known as chordae tendineae (do not even try to pronounce it. However, if you really must, it is chord-ee tend-in-ee). They connect the edges of the tricuspid and mitral valves to muscle bands or papillary (pronounced pap-pill-lurry) muscles. The papillary muscles shorten and lengthen during different phases of the cardiac cycle and keep the valve leaflets from flopping back into the atrium.

The chords are designed to control the movement of the valve leaflets similar to ropes attached to the sail of a boat. Like ropes, they allow the sail to bulge outwards in the direction of a wind but prevents them from helplessly flapping in the breeze. In other words, they provide the capability of a door jamb that allows a door to open and shut in a given direction and NOT beyond a certain point.

When the three leaflets of the tricuspid bulge upwards during contraction or emptying of the ventricles, their edges touch each other and close off backward flow to the right atrium. This important feature allows blood to flow through the heart in only ONE direction, and prevents it from leaking backwards when the valve is shut. The two leaflets of the mitral valve functions in a similar manner and allows flow of blood from the left atrium to the left ventricle, but closes and cuts off backward leakage into the left atrium when the left ventricle contracts and starts to empty.

Confused? Continue to hang in there. We will clarify this further in the next few pages. Please note that the repetition is intentional! Rephrasing and repeating an explanation often enhances the understanding and retention of key concepts. Skip areas that are redundant to you.