What is a Tilt Test?
What is Neurally Mediated Syncope (NMS)?
How is Tilt Test performed?
How to prepare for the test?
How long does it take?
How safe is it?
What information is provided by Tilt Test?
How quickly will I get the results of the test?

What is a Tilt Test? A Tilt Table Test or TTT is widely used in making the diagnosis of Neurally (pronounced new-rully) Mediated Syncope (pronounced syn-cup-ee) or NMS. Both of them are discussed below.

What is Neurally Mediated Syncope (NMS) and why do these patients pass out? NMS is a condition that can occur in a wide range of people, many of whom do not have any other associated cardiovascular problems. These patients give a history of repeatedly having syncope (passing out spells) over the course of several years. Some of these spells may be preceded by a hot sensation or nausea but many come on without any warning. The patient may fall to the ground and recover consciousness quickly and without any further problems. The episodes of syncope may occur at church, in the grocery store, while a blood specimen is being drawn, or while sitting quietly at home, etc. Surprisingly, the majority of the patients never sustain serious injuries and the diagnosis may go undetected for decades. Patient's get used to having "faints" and life goes on! The availability of the Tilt Test, its wide success in establishing the diagnosis of NMS, and effective treatment for NMS has resulted in the well deserved popularity of the test.

To understand this phenomenon, we must first examine how the nervous system of the body functions. During our daily activities, our heart rate (HR) and blood pressure (BP) constantly rise and fall to meet the needs of the body. The HR and BP are lower at rest, while the HR picks up and BP is elevated during emotional stress and exercise. The control of the HR and BP are under the domain of the sympathetic (pronounced sim-pa-thetic) and parasympathetic nervous system. The former increases the HR and BP while the latter reduces them. To simplify this concept, let us imagine that the body is an automobile. Pressing the accelerator pedal would make the car work harder and go faster. In contrast, pressing the brake pedal would slow the car down. Thus, the sympathetic nervous system behaves like an accelerator for the body while the parasympathetic system functions like a braking system. You with me? Great!

Normally, the sympathetic and parasympathetic nervous system work together in a very efficient and cooperative manner. Just like a good driver, the accelerator and brake pedals are used efficiently (one being slowly pressed while the other is smoothly released). The car slows down and speeds up so smoothly that one does not recognize the change. Similarly, our HR and BP goes up and down without us being aware of it. From time to time, this system breaks down in people with NMS. It is almost as if the accelerator pedal remains in the control of the car driver while the braking system is occasionally turned over to an extremely nervous "back seat driver." This spells trouble! Now, if the "car" accelerates too rapidly (HR and BP goes up), the back seat driver panics and SLAMS the brake. The HR and BP (either singly or together) drop suddenly and severely. This reduces blood supply to the brain and the patient passes out. The back seat driver then steps off the brake pedal, the HR and BP increases, blood flow is restored and the patient awakens.

How is the Tilt Test Performed? The patient is hooked to an EKG machine and a BP monitor. The HR and BP are constantly monitored during the procedure. An intravenous (IV) line is placed in the arm. Large patches are also applied to the patient's chest. 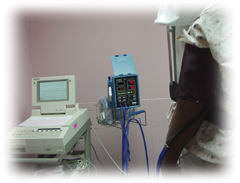 These patches are connected to an external pacemaker and turned on if the patient's HR slows down and does not pick right up (in the majority of cases the slow HR is transient and the external pacemaker is only a precautionary measure). 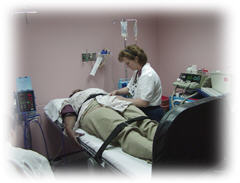 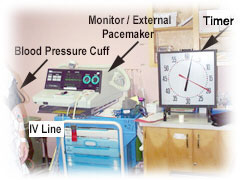 The patient lays on a swivel table in a flat position. Safety straps are applied across the chest and legs to hold the patient in place.

After obtaining the baseline HR and BP, the motorized table is tilted up to an angle of 80 degrees. This simulates going from a flat (supine) to a standing or upright position. The change in position causes the HR and BP to rise and the patient's response is noted. Depending upon the physician and the protocol of a given laboratory, the duration of time spent in the supine and upright position can vary from 5 to 30 minutes. 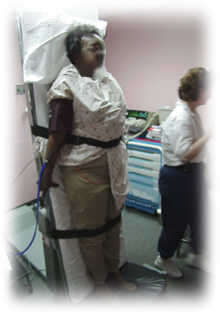 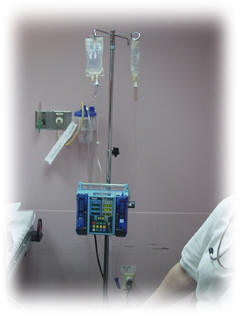 If nothing happens, the table is returned to the flat position and an intravenous infusion of isoproternol (Trade name = Isuprel) is started. This medicine increases the HR and BP. This effect is similar to that produced by our own natural adrenaline release. As you may have gathered, the test is now simulating what happens when the sympathetic nervous system is stimulated and the "accelerator" is pressed. The tilt table is then raised back up to 80 degrees and the IV medication continued.

A stop clock in the room is used to keep track of time. If an abnormal result is not seen, the table is lowered and then raised back up after increasing the dose of the IV medicine. In patients with NMS, the increase in HR and BP is usually sufficient to cause "panic in the back seat driver" (parasympathetic nervous system). When this happens, the HR, BP or both drop suddenly and dramatically as the parasympathetic system "slams the brake pedal.". The patient gets dizzy and passes out. Thus, TTT succeeds in simulating a real life situation and establishes the cause of recurrent black out spells. With the above changes, the test is considered positive. The IV medicine is immediately stopped and the patient returned to the flat or supine position. Within a few seconds, the patient regains consciousness and both the HR and BP return to normal. The patient is observed for 10 to 20 minutes and then disconnected from the equipment.

How to prepare for the Tilt test? Check with your physician to see if any of your medications need to be held. You should not eat or drink after midnight to reduce the risk of nausea and vomiting during the test. Try and wear a blouse or shirt to expedite preparation for the test.

How long does the Tilt test take? The test generally takes a total of 1 1/2 hours. This includes preparation, the actual test and the recovery phase. Please make sure that somebody can drive you home after the test.

How safe is a Tilt test? The test is fairly safe, although it can be dramatic for the patient if the test is positive and causes a black out spell. Not a very pleasant circumstance! However, the patient needs to recognize that this denotes a positive response and opens the door to the addition of extremely effective medications that may dramatically reduce or totally eliminate the patient's recurrent black out spells. In rare cases, the test may produce persistent abnormal heart rhythm and patients with coronary artery disease may occasionally experience lingering chest discomfort. Experienced staff and equipment are on hand to handle these potential complications.

What information is provided by the Tilt test? The tilt test helps to confirm the diagnosis of NMS. This is extremely important because there is effective treatment for the condition which can either totally eradicate or dramatically reduce the frequency and intensity of symptoms (dizziness and black out spells). Recent research studies have also shown a correlation between chronic fatigue syndrome (CFS) and NMS. Treatment aimed at NMS has been shown to be beneficial in many patients with CFS (if they have a positive tilt test). The use of beta-blockers is most commonly employed in the treatment of NMS. The beta-blockers acts as a "governor" on a carburetor. The motor does not "rev up" as much (HR and BP does not increase drastically) and the back seat driver (parasympathetic system) remains calm and does not slam on the brakes. Other drugs that have shown benefit include aminophylline, disopyramide and certain anti-depressants serotonin-uptake inhibitors).

How quickly will I get the results of the Tilt Test? The tilt test results are generally provided to you as soon as it is completed. Changes in your medications, if indicated by the results of the test, may be discussed at the same time or during a subsequent office visit.